Leading the Way on Research To Combat Preventable Medical Errors 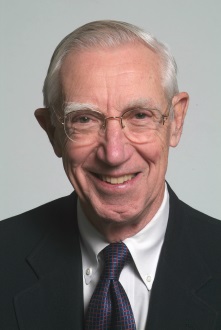 "AHRQ funding allowed me to conduct research on adverse events related to use of medications, including, most importantly, the efficacy of systems changes to prevent them."

Lucian Leape, M.D., recently retired Adjunct Professor of Health Policy at Harvard Chan School of Public Health, has been a leading voice in the field of patient safety for more than a quarter century. Driven by a desire to reduce the frequency of preventable medical errors in health care, Dr. Leape studied the systems research used to prevent errors in other high-risk fields such as aviation.  The results of his research were published as a groundbreaking 1994 JAMA study titled “Error in Medicine,” which outlined how systems theory could be applied in health care to prevent medical errors.

Eager to prove his theory, Dr. Leape turned to AHRQ (then called the Agency for Health Care Policy and Research) for funding. He teamed up with colleagues at Brigham and Women’s Hospital in Boston to conduct a study that evaluated the incidence and preventability of adverse drug events (ADEs) in hospitals.  They found that ADEs were common and that more than one quarter of them were caused by errors.  They demonstrated that a relatively small number of systems failures led to the errors, indicating that most were potentially preventable.

Building on this seminal work, AHRQ funded a series of studies, collectively called the ADE Prevention Study. In those studies, Dr. Leape and his associates conducted research on how administrative structure impacted ADE reporting, the rate of preventable ADEs in intensive care units (ICUs) versus non-ICU settings, and whether a computerized physician order entry system could identify and help prevent these events.  Later work identified the importance of reconciling medication orders. "AHRQ funding allowed me to conduct research on adverse events related to use of medications, including, most importantly, the efficacy of systems changes to prevent them," says Dr. Leape.

Dr. Leape also collaborated with investigators at RAND to study the under- and overuse of procedures such as cardiac revascularization and hysterectomies.  Dr. Leape has also studied ways to implement patient safety best practices.  In another AHRQ-funded study, he and his colleagues looked at the use of a voluntary statewide hospital collaborative to implement safety practices, identifying many elements that successful projects continue to use today.

Dr. Leape’s ongoing advocacy for preventing medical errors has kept him at the center of the patient safety movement.  In 1996, he was one of the founding board members of the National Patient Safety Foundation (NPSF).  His work formed the basis for the Institute of Medicine's landmark 1999 report, To Err Is Human: Building a Safer Health System, which helped make safe, high-quality care a national issue.  He recently stepped down as chairman of the NPSF Lucian Leape Institute, a think tank of thought leaders whose mission is to define strategic paths and calls to action to stimulate a new generation of researchers to create innovations that improve patient safety.