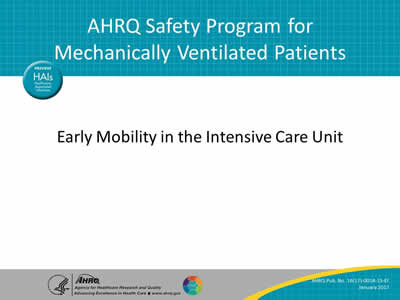 In this slide set, we will look at the benefits, safety, feasibility, and sustainability of early mobility. Many hospitals and intensive care units or ICUs have considered early mobility as an option to improve the quality of care for both patients who are mechanically ventilated and those who are not. 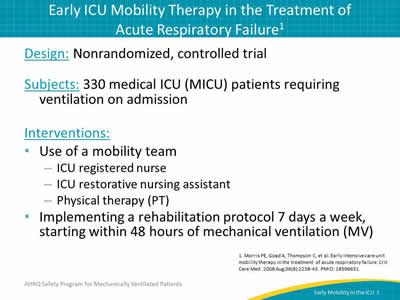 The Morris et al. study looked at 330 ventilated patients in a university medical ICU using a nonrandomized, controlled trial. The purpose of the intervention was to use a multidisciplinary Mobility Team composed of ICU registered nurses, restorative nursing assistants, and physical therapists. This team was available 7 days per week. They used a rehabilitation protocol that started within 48 hours of mechanical ventilation. The control group received usual care.

For the intervention group, physical therapy was initiated through an automatic physician’s order. Physicians had to write patient-specific orders for the control group. The protocol had four different levels of activity and these were used based on the patient’s current condition. These ranged from maximum activity levels of passive range of motion to active chair transfer. The intervention ended when the patient was discharged from the ICU. 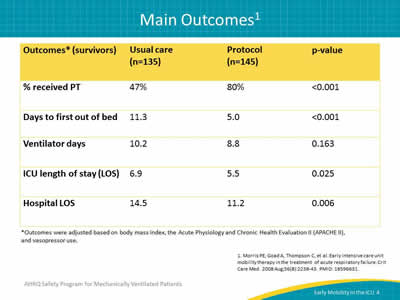 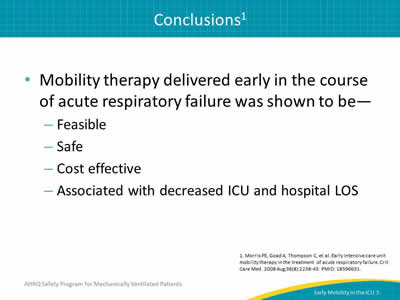 Their conclusion was that mobility therapy delivered early in the course of acute respiratory failure is feasible, is safe, does not increase cost, and is associated with decreased ICU and hospital length of stay. 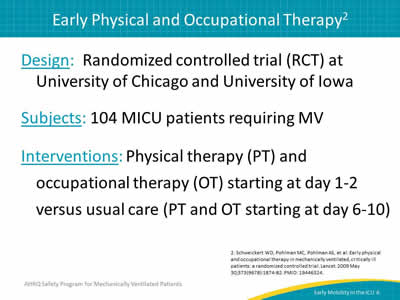 The Schweickert et al. study involved a randomized, controlled trial at the University of Chicago and the University of Iowa. One hundred four medical ICU patients requiring mechanical ventilation were enrolled. The intervention included physical and occupational therapy 7 days per week beginning on the first 2 days of mechanical ventilation. The control arm received the usual care in which a physician started physical and occupational therapy and filled patient-specific orders on days 6–10. Activities were progressive and ranged from passive range of motion to walking. All activities were appropriate to the patient’s current medical status. 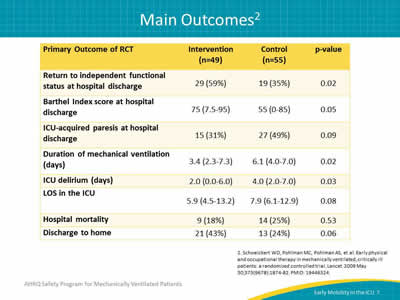 Slide 8: How was PT/OT provided to get benefits? 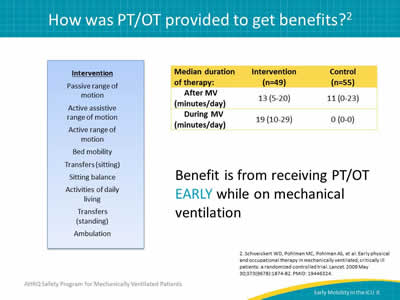 The range of activities used is listed here. Patients were given passive and then active range of motion, and advanced through bed mobility, sitting transfers, sitting, activities of daily living, standing transfers, and ambulation. Let’s look at this table. The median duration of the therapy table shows that intervention patients received both physical and occupational therapy while they were intubated and afterwards. However, those patients in the control group only received this therapy after they were no longer on mechanical ventilation. The amount of therapy the two groups received after they were no longer on mechanical ventilation is similar. The benefit the patients in the intervention group received was all due to receiving the physical and occupational therapy early, while they were still on mechanical ventilation. 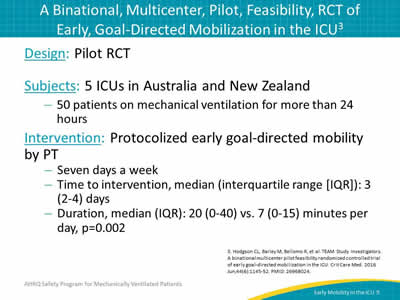 The Hodgson et al. study involved a small pilot randomized and controlled trial in five ICUs in Australia and New Zealand. It enrolled 50 patients who had been on mechanical ventilation for more than 24 hours. The intervention arm included active functional activities, including rolling, sitting, standing, and walking. The control arm was usual care and included passive movements. Mechanically ventilated patients were not involved in active activities in the control arm. 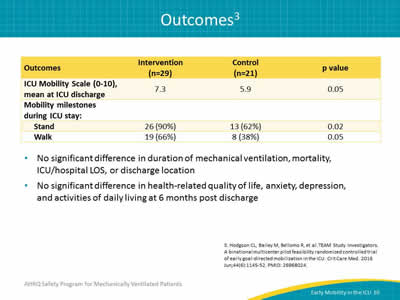 The ICU Mobility Scale assesses the following: mental status, bed mobility, barriers to mobility, functional strength, transfers, gait, and endurance. This scale was used to determine the level of mobility at discharge. On this 10-point scale, the intervention group had a mean score of 7.3. The control group had a score of 5.9. This is a significant difference. Looking at the mobility milestones, 90 percent of the patients were able to stand while they were in the ICU, while only 62 percent of the control group were able to meet this goal. A similar result was achieved with walking. 66 percent of the patients in the intervention group were able to walk while in the ICU, only 38 percent achieved this goal in the control group.  There was no significant difference in the duration of mechanical ventilation, mortality, ICU or hospital length of stay, or discharge location. Nor were there any significant differences in a 6-month assessment of quality of life, the Hospital Anxiety and Depression Scale, activities of daily life, or the time to return to work. 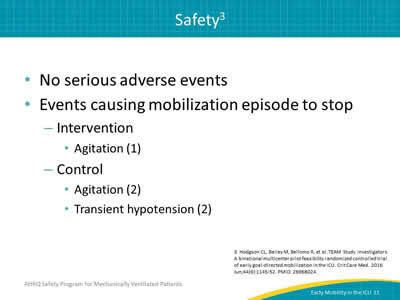 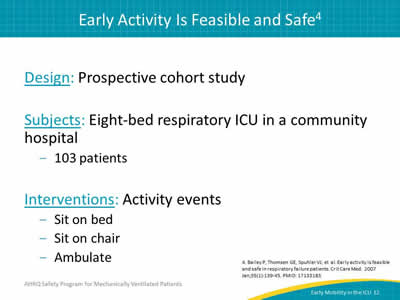 Bailey et al. performed this prospective cohort, feasibility study in an eight-bed respiratory ICU in a community hospital. Enrollment was 103 patients. Early activity for this project was defined as starting when the patient was physiologically stable and the patient was able to respond appropriately to verbal stimulation. Patients were started on a careful trial of activity, and close watch was kept for adverse events. Activity events were defined as sitting on the bed, sitting in a chair, and ambulating. The goal of the activity was to ambulate for greater than 100 feet before respiratory ICU discharge. 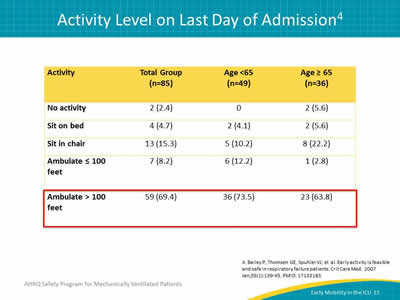 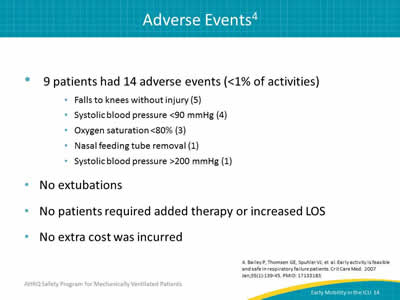 Nine patients had a total of 14 adverse events. None of these resulted in a serious outcome. These included: five falls to knees without injury, four with systolic blood pressure less than  90 mmHg, three 02 saturation less than 80 percent, one nasal feeding tube removed, and one systolic blood pressure >200 mmHg. There were no extubations, no patients required added therapy or increased length of stay, and no extra cost was incurred due to these events. 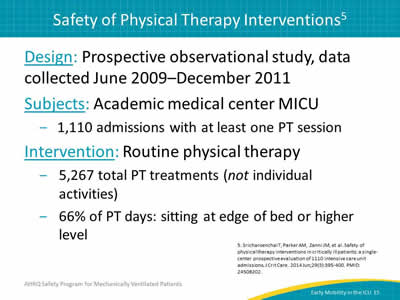 Sricharoenchai et al. performed this retrospective cohort study of physical therapy intervention in a medical ICU or MICU at an academic medical center. This MICU has a very active physical therapy program with a focus on actively engaging their patients as soon as possible after activity is physiologically appropriate. They collected data regarding physical therapy from June 2009 to December 2011. There were 1,110 admissions with at least one physical therapy session during this time. This translated to 5,267 total physical therapy treatments. Sixty-six percent of the physical therapy days had the patient at least sitting at the edge of the bed. 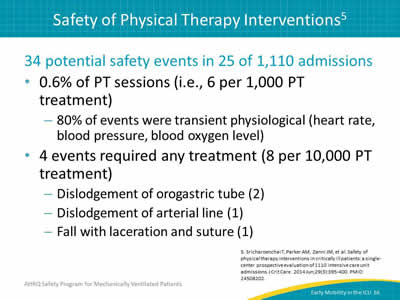 Thirty-four potential safety events occurred in 25 of the 1,110 admissions. This translates to 0.6 percent of the physical therapy treatments. Eighty percent of the events were due to transient physiological changes. These included: eight cases of mean arterial pressure greater than 140 mmHg, five cases of mean arterial pressure less than 55 mmHg, and four cases of oxygen desaturation. Only four events required any treatment: two cases of dislodgement of an orogastric tube, one case of dislodgement of an arterial line, and one fall with a laceration and suture. None of the events requiring treatment required additional treatment or increased cost or length of stay.

Slide 17: Early Mobility in a Trauma and Burns ICU 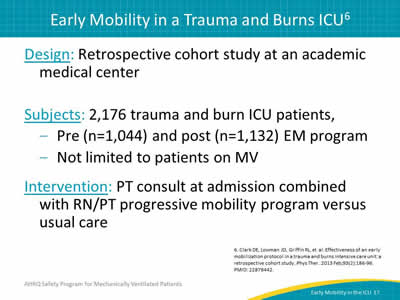 Clark et al. performed a retrospective before and after cohort study, based on chart review, at an academic medical center in a trauma and burns ICU. 1,044 were included in the before or control arm and 1,132 were included in the after or intervention arm.  This study was not limited to those patients on mechanical ventilation. The protocol for the intervention included a progressive program based on the physiologic status of the patient at start of therapy, starting with passive range of motion and culminating, as appropriate, with ambulation. They also used daily rounds to assure appropriate communication between the care disciplines on the unit. Usual care was defined as bed rest.

This study had no documented adverse events in either arm. 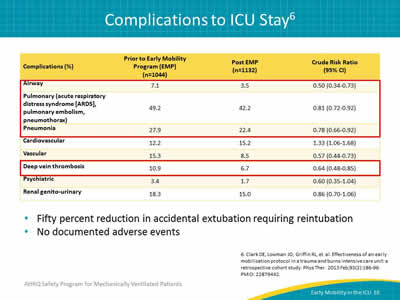 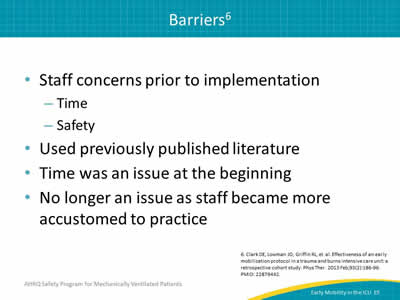 In this study, prior to implementation, staff were concerned about the safety of the patients and the increased time such an early mobility program would require. Previously published literature was used as an educational tool to help staff understand the advantages of such a program. As the project was implemented, time was definitely an issue. The staff underestimated the required time to accomplish the physical therapy evaluations and protocols. However, as they became more involved in the project, time was no longer considered to be a concern.

Slide 20: Barriers to Activity in the ICU 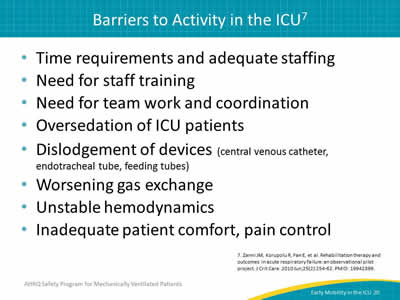 Zanni et al. performed an observational study of consecutive patients who had been on mechanical ventilation for 4 or fewer days during a 13-week period in an academic hospital MICU. Thirty-two patients met the inclusion criteria. Of these patients, only 21 received physical therapy orders from a physician. Patients were to receive physical therapy sessions once per day based on the patient’s physiological condition, and included rolling, sitting at the edge of the bed, transferring from sitting to standing, ambulation, grooming and bathing.

This group found these eight items to be the biggest barriers to implementation. The first four items listed are staff based. Staff needed training and they needed to understand the processes involved in early mobility. The unit needed to assure there was adequate staffing to allow time to devote to mobilizing the patients. Patients were oversedated. Patient-based barriers included dislodgement of devices, worsening gas exchange, unstable hemodynamics, and inadequate patient comfort and pain control. 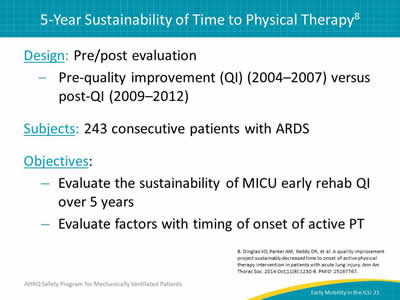 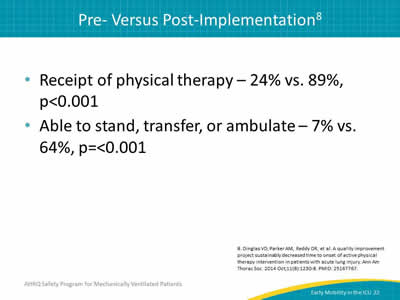 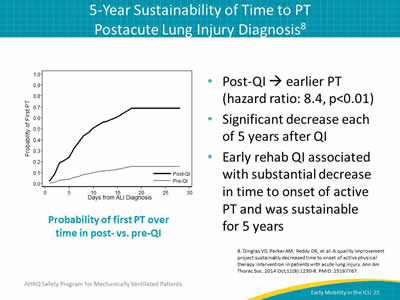 Many quality improvement projects, even if they have shown substantial success, are dropped from patient care over time. This project shows that early mobility can successfully be incorporated into routine clinical practice. It also shows sustainability with an early mobility program is possible, and it can continue to bring positive results to the patients. 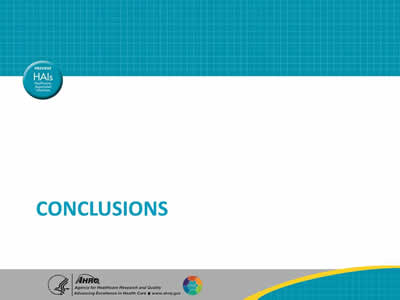 Now we will summarize the benefits, safety, feasibility, and sustainability of early mobility. 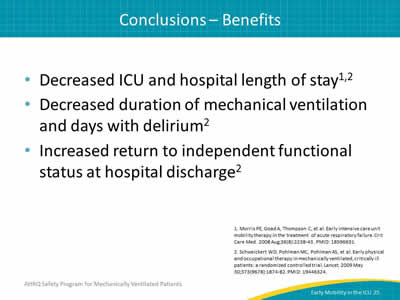 Early mobility in the ICU has a historical basis and has been used as a patient treatment modality for quite some time. It has been shown to significantly decrease length of stay both in the ICU and in the hospital. We have reviewed an article that showed a significant decrease in both ICU and hospital length of stay. One of these articles also showed significant decreases in both the duration of mechanical ventilation and the number of patient days with delirium. These are all goals each of your ICUs and hospitals adhere to and early mobility is one of the best ways to achieve these goals. 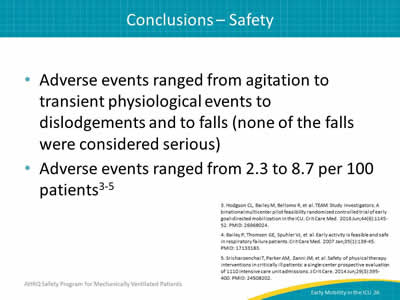 All of the articles we reviewed stated that early mobility programs are safe. The adverse events discussed in these articles range from agitation to transient physiological events to dislodgements of catheters and other devices to falls, though none of the falls described were serious, and they were rare. The event rates ranged from 2.3 to 8.7 per 100 patients. Please note this is not per treatment as that information was not available. 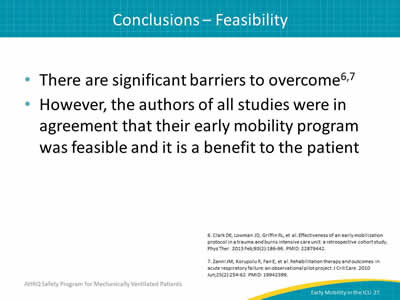 There are significant barriers to overcome with staff, such as insufficient time, inadequate staffing, training, teamwork, and coordination. These barriers may take some time to address, but they are addressable. Each of these studies started at the same point and involved building a program.

There are also patient-based barriers such as oversedation, worsening gas exchange, unstable hemodynamics, and inadequate pain control. Some of these, such as oversedation and inadequate pain control, are addressable through staff education and training. You may need to assure there are spontaneous awakening and spontaneous breathing trials used on your unit to control the problem with over-sedation.

All quality improvement projects in the hospital are time consuming. However, if you look at patient outcomes and the decrease in length of stay, both in the ICU and the hospital, an early mobility program is worth the effort. 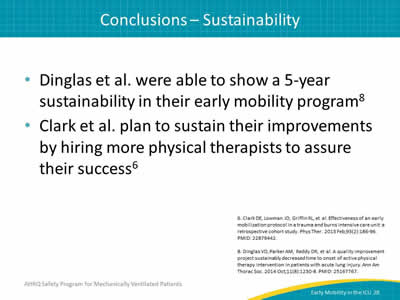 Finally, early mobility efforts can be sustainable. Dinglas et al. were able to show a 5-year sustainability in their early mobility program. Clark et al. plan to sustain their improvements by hiring more physical therapists to assure their success. 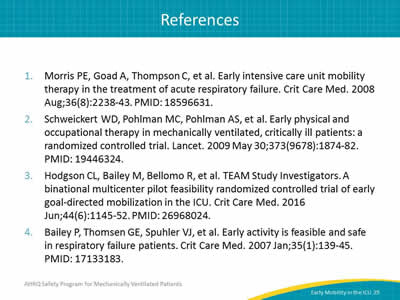 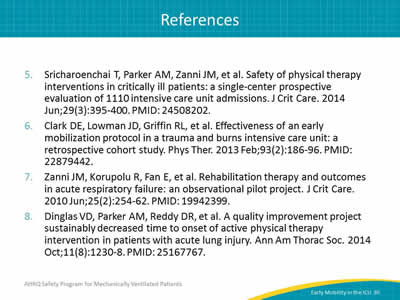