Today, AHRQ is pleased to release its 2017 State Snapshots, a set of online dashboards that each year provide updated, detailed analyses of how each State, plus the District of Columbia, is performing in important areas of health care quality.

The Snapshots are especially useful to State health care leaders and policymakers who can use the data to review how their State performs according to achievable benchmarks. The resource identifies trends in health care quality and disparities—fundamental information that can inform ongoing efforts to address gaps in the quality of care and access to services.

Data in the State Snapshots are drawn from AHRQ’s 2017 National Healthcare Quality and Disparities Report (QDR), also released today with updated data. The QDR, a report mandated by Congress, provides a broader, national view of trends in health care quality.

The 2017 QDR offers some welcome news: almost 70 percent of quality measures related to person-centered care improved nationwide from 2000 to 2016. Unfortunately, the data also reveal continuing disparities in care related to race, ethnicity, income, and other factors. In 2015, for example, the rate of potentially avoidable hospital admissions for hypertension among adults 18 and older was five times as high among blacks than whites. While the rate of end-stage renal disease due to diabetes was 117 per million among non-Hispanic whites, it was 303 per million among Hispanics.

For more detailed State-specific information, the State Snapshots allow users to choose a State and see how that State has performed according to more than 250 measures on quality and access to health care. Evaluations are measured in three important categories—types of care (such as preventive or chronic care), settings of care (such as hospital care or nursing home care), and clinical area (such as care for cancer or diabetes).

State Snapshots users seeking detailed information easily can check how a State performed against national benchmarks on specific measures. The tool’s color-coded prompts can guide a user to data, for example, on a particular State’s percentage of nursing home patients with pressure ulcers, or the rate of hospital admissions for asthma.

Trend data for most measures span from 2000 to 2016, except for select measures of access to care tracked through 2017. The newest calculations show that Maine, New Hampshire, Rhode Island, Wisconsin, and Massachusetts were the Nation’s top-5 performing States when it comes to overall health care quality. 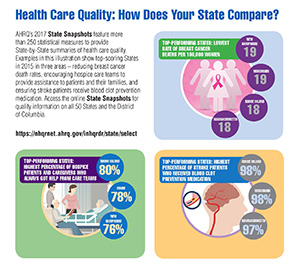 A closer look identifies some of the performance areas in which these States excelled:

While the State Snapshots highlight many areas of impressive performance, opportunities for improvement exist even among top-performing States. In Maine, for example, hospital admissions for opioid-related diagnoses were far higher than achievable benchmarks. And in Massachusetts, the percentage of nursing home patients taking antipsychotic medications was significantly higher than the national benchmark.

AHRQ’s annual update of the QDR and the State Snapshots exemplify the Agency’s ongoing commitment to developing a reliable and actionable inventory of health care quality data. We’re pleased that this year’s data show encouraging improvements in vital areas, and we’re confident that these resources will support the efforts of policymakers, health system leaders, public health advocates, researchers, and clinicians who work each day to improve the quality of Americans’ health care.

Karen Chaves is Director of the National Healthcare Quality and Disparities Report Program in AHRQ’s Center for Quality Improvement and Patient Safety.