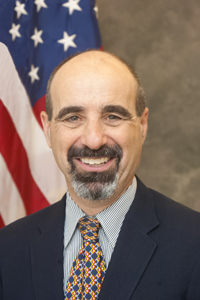 My first full week as director of AHRQ was an eventful one. I had hardly settled into my new office when a new BMJ analysis of data on medical errors put patient safety, one of AHRQ’s top priorities, in the news media across the country.

The Johns Hopkins researchers who analyzed data from a variety of sources asserted that medical errors are the Nation’s third-leading cause of death. It made national news, but it didn’t really surprise those of us who work in the health care field and follow patient safety closely. We’ve known about the severity and consequences of medical errors for a long time.  As the late John Eisenberg, M.D., a former AHRQ director and one of my early mentors, used to say, "Even one medical error is one too many."

Here at AHRQ, we’re developing the evidence, tools, and training materials to help frontline health care providers prevent medical errors. We started our work with hospitals and more recently expanded to a focus on nursing homes and primary care offices. One major example is our work with colleagues across the U.S. Department of Health and Human Services as a part of a public-private initiative called Partnership for Patients that is focused on making care safer, more reliable, and more affordable. We are coordinating the development and use of a national measurement strategy that is reflected in the AHRQ report entitled "Saving Lives and Saving Money: Hospital-Acquired Conditions Update."

And that’s where our work comes in: preventing errors before they happen in the first place. AHRQ continues to marshal its resources to develop evidence about how to reduce patient harm. We’ve developed tools and training materials to help frontline providers work together as teams to prevent infections and other harms, and we have created surveys and other quality measurement tools to track progress. AHRQ also supports a tremendous Web-based resource featuring the latest news and essential resources on patient safety, AHRQ’s Patient Safety Network, which is run by my longtime colleague and friend Bob Wachter, M.D., the interim Chair of the Department of Medicine at the University of California, San Francisco.

As we look toward National Hospital Week next week, the good news is that hospital leaders and clinicians are using AHRQ’s resources to make measurable improvements. AHRQ’s most recent hospital-acquired conditions report shows that adverse events dropped by 17 percent from 2010 to 2014. We estimate that this decline prevented 87,000 deaths over that period.

With concerted national attention and resources, U.S. health care providers informed by research have made great strides in preventing deaths due to cardiovascular disease, cancer, and many other conditions. It’s now time to redouble our efforts to prevent adverse events and fulfill our fundamental promise to keep patients safe from harm.

One final note. This week’s news serves as a reminder that we have not yet completed our heroic  journey to improve health care. I was so convinced of the importance of the goal and AHRQ’s contribution toward it that I decided to relocate to Washington, DC from San Francisco. It is a great honor and a privilege to have the opportunity to lead the impressive AHRQ team that’s so dedicated to creating evidence for safe, high-quality, accessible, equitable, and affordable health care.

I am a former grantee and study section member, and I have benefited directly throughout the course of my career from close relationships with each of the three previous directors—John Eisenberg, Carolyn Clancy, and Rick Kronick. I seek to honor their past while trying to steer the Agency toward an ever-brighter future.