The proportion of women who experienced serious complications while giving birth in U.S. hospitals rose 45 percent between 2006 and 2015, according to a report released today by the Agency for Healthcare Research and Quality (AHRQ). 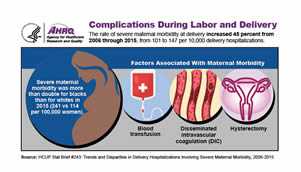 The analysis, based on data from AHRQ’s Healthcare Cost and Utilization Project (HCUP), explored overall trends in severe maternal morbidity and mortality while identifying areas of particular concern. The new report indicates, for example, that rates of acute renal failure, shock, mechanical ventilation use and sepsis at delivery all more than doubled during the 10-year period.

“This report provides an essential update to our understanding of an urgent public health issue,” said AHRQ Director Gopal Khanna, M.B.A. “With these data in hand, State and Federal agencies, patient safety experts and health systems can evaluate maternal morbidity trends in greater depth, a vital step before addressing the challenge.”

In addition, AHRQ is working with colleagues at the HHS Health Resources and Services Administration to integrate key components of teamwork and safety culture training strategies into The Alliance for Innovation on Maternal Health program’s maternal safety bundles.