Nearly 125,000 hospitalizations among older Americans involved opioid-related diagnoses in 2015, according to an Agency for Healthcare Research and Quality (AHRQ) report that provides new insights into how one of the Nation’s most urgent public health problems is impacting the senior population. 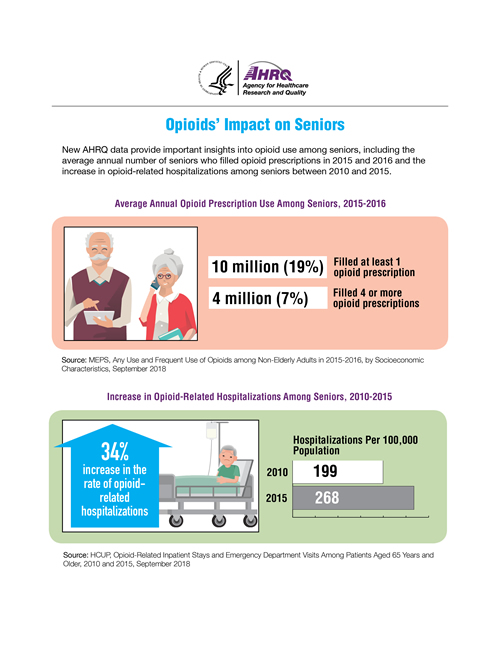 “The statistics in these reports provide important new insights into the opioid crisis and its impact on one of the Nation’s most vulnerable populations,” said AHRQ Director Gopal Khanna, M.B.A. “The information is essential in supporting the Department of Health and Human Services’ and HHS Secretary Alex Azar’s ongoing efforts to confront the epidemic.”

The reports are derived from two AHRQ databases: the Healthcare Cost and Utilization Project, the Nation’s most comprehensive source of hospital data, and the Medical Expenditure Panel Survey, the only national data source measuring how Americans use and pay for medical care.

The report also showed that seniors’ inpatient hospital costs and ED charges were higher in 2015 if related to opioid use ($14,900) rather than other conditions ($13,200) and that those admitted with an opioid-related problem were also more likely to be discharged to another institution for post-acute care (37 percent) than cases not involving opioids (30 percent). Nearly all (96 percent) of those hospitalized for opioid-related issues had multiple chronic conditions.

The new report measuring prescription opioid use among seniors in the noninstitutionalized population, meanwhile, estimated that nearly 1 in 5 senior adults, on average, filled at least one opioid prescription in 2015 and 2016 and that 7 percent of seniors filled 4 or more opioid prescriptions, which the report considered to be “frequent use.”

“These reports underscore the growing and under-recognized problems with opioid use in older populations, including those who suffer from chronic pain and are at risk for adverse events from opioids,” Khanna said. “The challenge is safe prescribing for those who need opioids for pain while avoiding overuse or misuse.”