Part 1: Overviews of the Report and the Hispanic Population

This chartbook is part of a family of documents and tools that support the National Healthcare Quality and Disparities Reports (QDR). The QDR includes annual reports to Congress mandated in the Healthcare Research and Quality Act of 1999 (P.L. 106-129). These reports provide a comprehensive overview of the quality of health care received by the general U.S. population and disparities in care experienced by different racial, ethnic, and socioeconomic groups. The purpose of the reports is to assess the performance of our health system and to identify areas of strengths and weaknesses in the health care system along three main axes: access to health care, quality of health care, and priorities of the National Quality Strategy.

The reports are based on more than 250 measures of quality and disparities covering a broad array of health care services and settings. Data are generally available through 2012, although rates of uninsurance have been tracked through the first half of 2014. The reports are produced with the help of an Interagency Work Group led by the Agency for Healthcare Research and Quality (AHRQ) and submitted on behalf of the Secretary of Health and Human Services (HHS).

The report demonstrates that the Nation has made clear progress in improving the health care delivery system to achieve the three aims of better care, smarter spending, and healthier people, but there is still more work to do, specifically to address disparities in care.

Chartbook on Health Care for Hispanics

Examples of successful interventions come from the AHRQ Health Care Innovations Exchange: https://innovations.ahrq.gov/. Go to Introduction and Methods for more information about methods used in the chartbook.

Diversity of the Hispanic Population in the United States

Health of the Hispanic Population in the United States

Projected Growth of the Hispanic Population Between 2014 and 2060

Distribution of Population by Race and Hispanic Origin 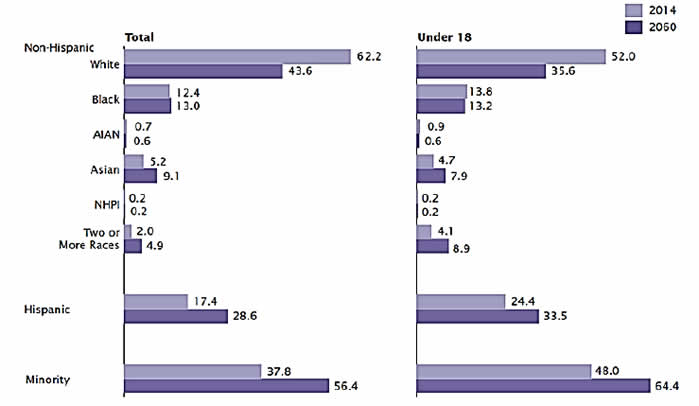 Key: AI/AN = American Indian or Alaska Native; NHPI = Native Hawaiian or Other Pacific Islander.
Source: U.S. Census Bureau, 2014 national projections.
Note: Unless noted, race categories represent race alone. Percentages of the population under 18 may not add to 100 due to rounding.

Distribution of the U.S. Hispanic Population, 2010

Hispanic or Latino Population as a Percentage of Total Population, by County, 2010 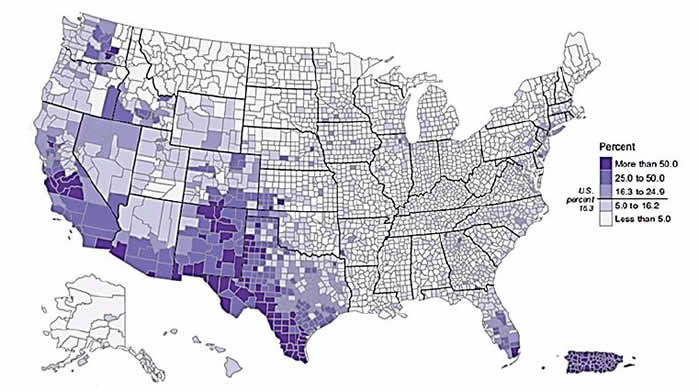 Older Hispanics in the United States

Health of Older Hispanics in the United States