This Chartbook on Access to Health Care is part of a family of documents and tools that support the National Healthcare Quality and Disparities Report (QDR). The QDR includes annual reports to Congress mandated in the Healthcare Research and Quality Act of 1999 (P.L. 106-129). These reports provide a comprehensive overview of the quality of health care received by the general U.S. population and disparities in care experienced by different racial, ethnic, and socioeconomic groups. The purpose of the reports is to assess the performance of our health system and to identify areas of strengths and weaknesses in the health care system along three main axes: access to health care, quality of health care, and priorities of the National Quality Strategy.

The reports are based on more than 250 measures of quality and disparities covering a broad array of health care services and settings. Data are generally available through 2013, although rates of uninsurance have been tracked through the September 2015. The reports are produced with the help of an Interagency Work Group led by the Agency for Healthcare Research and Quality (AHRQ) and submitted on behalf of the Secretary of Health and Human Services (HHS).

Introduction and Methods contains information about methods used in the chartbook. A Data Query tool (http://nhqrnet.ahrq.gov/inhqrdr/data/query) provides access to all data tables.

Number and percentage of access measures for which members of selected groups experienced better, same, or worse access to care compared with reference group 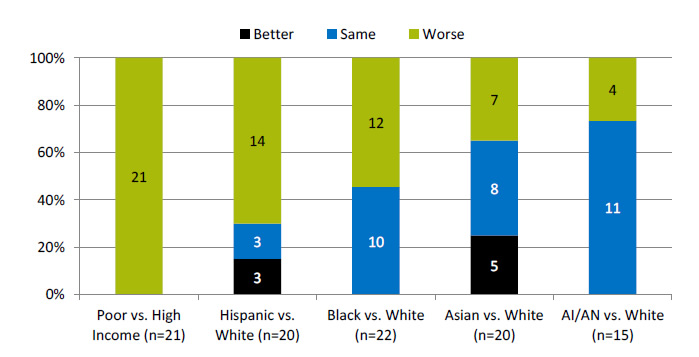 Note: Poor indicates family income less than the Federal poverty level; High Income indicates family income four times the Federal poverty level or greater. Numbers of measures differ across groups because of sample size limitations. For most measures, data from 2013 are shown. The relative difference between a selected group and its reference group is used to assess disparities.