Chartbook on Health Care for Blacks

Part 3: Trends in Access and Priorities of the National Quality Strategy

Six Chartbooks Organized Around Priorities of the National Quality Strategy 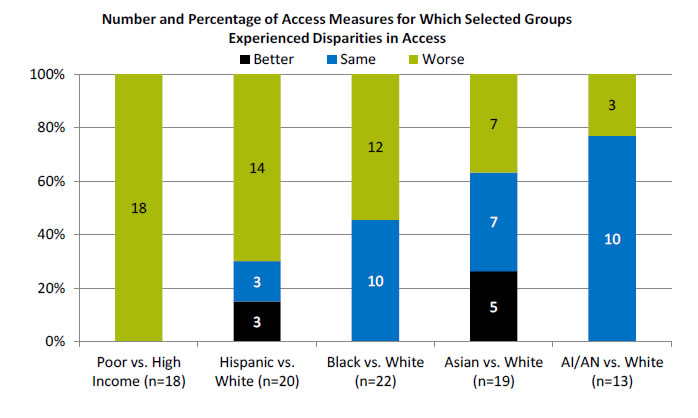 Key: AI/AN = American Indian or Alaska Native; n = number of measures.
Note: Poor indicates family income less than the Federal poverty level; high income indicates family income four times the Federal poverty level or greater. Numbers of measures differ across groups because of sample size limitations. Measures that achieve an overall performance level of 95% or better are not reported in the QDR and are not included in these analyses. Because disparities are typically eliminated when overall performance reaches 95%, our analyses may overstate the percentage of measures exhibiting disparities.

The relative difference between a selected group and its reference group is used to assess disparities.

Age-sex adjusted percentage of people of all ages with a usual place to go for medical care, by race/ethnicity, 2013-2014 and January-September 2015

Adults who needed care right away for an illness, injury, or condition in the last 12 months who sometimes or never got care as soon as wanted, by race, 2002-2013, and stratified by insurance, Blacks and Whites, 2013